Mould Types – Which Ones Should You Be Wary Of? And there are thousands of types that exist, all coming in various colours, textures and levels of danger to your health.

So, what types should you be wary of?

And what should you do if you find mould growing in your home?

Exactly How Many Species of Mould Are There?

There are over 100,000 different species of mould.

Mould is typically categorised in one of two ways – their level of health concern or their colour.

Let’s dive into some information about each below.

Which Mould Types Should I Be Concerned About? Mould affects everyone differently, with an individual’s reaction depending on the duration of exposure, their immune system and the type of mould they’re exposed to.

For this reason, mould types are often grouped into one of three categories based on their level of potential health risk.

Allergenic moulds affect those prone to allergies or asthma. This applies to about 20-30% of the population who experience reactions as a result of exposure to allergens such as mould – a condition called allergic rhinitis.

Most people free of allergies won’t be affected by exposure to allergenic moulds in small amounts.

The most common allergenic moulds include Alternaria, Aspergillus, Cladosporium and Penicillium.

Pathogenic moulds are capable of causing infections and diseases in humans and other organisms. They are particularly dangerous to those with weak immune systems, commonly affecting infants, the elderly and cancer or transplant patients.

Most healthy people with good immune systems will be able to fight off pathogenic moulds.

The most common pathogenic moulds include Aspergillus species, Cryptococcus Neoformans and Histoplasma Capsulatum.

Unlike pathogenic and allergenic moulds, toxic moulds seek out to intentionally harm living things. They produce mycotoxins, poisonous chemicals that can lead to temporary irritation or even prolonged illness in humans. Exposure can result from inhalation, skin contact or ingestion of mycotoxins.

Prolonged exposure to toxic moulds and their mycotoxins can be dangerous to any individual.

Don’t Judge A Mould By Its Colour

Without a doubt, the most common way people identify mould and its perceived level of danger is by colour.

However, a single colour like black or green mould doesn’t just signify one type of mould. There are actually thousands of species of mould that can identify as various colours throughout their lifespan.

The colour of mould is no indication of the risk associated with it.

We have come across a vast array of mould colours in our time, from purple to orange, with some of the most common colours we encounter in Australian homes including: Black mould – probably the most well-known mould of all.

Contrary to popular belief, black mould isn’t just one type of mould. It’s actually a general term used to refer to any species of mould that presents as a dark green, grey or black colour. Thriving in moist, warm environments, black moulds are often found in showers, toilets, baths, kitchens and basements.

While Stachybotrys Chartarum is the strain often referred to as the ‘black mould’, other strains that can present as a black colour include Alternaria, Aspergillus and Cladosporium.

In most cases, yes – but to varying degrees.

Most black mould types fall under the ‘toxic mould’ category. This is because common black mould species such as Stachybotrys Chartarum and Aspergillus release toxic spores called mycotoxins. These mycotoxins have been known to cause respiratory, dermatological and eye irritations in severe cases of prolonged exposure.

However, there is a commonly held belief that all black moulds can cause severe health problems.

While the black moulds that do produce mycotoxins can be harmful for those with weak immune systems – the reality is for most healthy people, black mould won’t kill you and is unlikely to make you sick.

It is important to note that mould of any colour can be toxic under the right circumstances – not just black mould. There are many species of mould that can take on a yellow hue. These include Aspergillus, Mucor, Cladosporium and Epicoccum Nigrum.

There are a large variety of yellow mould species, some of which can range from allergenic to toxic mould types. These toxic species of yellow mould include Aspergillus, which can produce mycotoxins that can be harmful to your health if inhaled. Green is the most common mould colour of them all. Green mould can also appear as blue, black or pink depending on its maturity and appear dusty or fuzzy depending on the species.

Commonly found within the home, green mould thrives in warm, damp environments such as bathrooms, kitchens, walls and basements.

There are hundreds of species that appear green, however the three most commonly found in Australian homes include Aspergillus, Penicillium and Cladosporium.

As there are hundreds of green mould species, their level of danger can range from allergenic to pathogenic to toxic moulds. Certain strains of Cladosporium are believed to cause infections to your skin and brain, whereas Aspergillus is known to release toxic spores spurring allergic reactions. Easily distinguishable by its bright orange colour, orange mould often appears slimy, wet and lumpy. It’s commonly found both inside and outside the home, thriving in damp humid environments like bathrooms, wood and food products.

There are several strains of mould that appear orange. The most common strains include Acremonium, Fuligo Septica and Trichia Varia

As there are a large variety of orange mould species, some strains can be more dangerous than others.

In small amounts, exposure to orange moulds is not considered dangerous for healthy individuals. However, some orange mould species, particularly Acremonium are classified as toxic moulds and can become a hazard to your health. 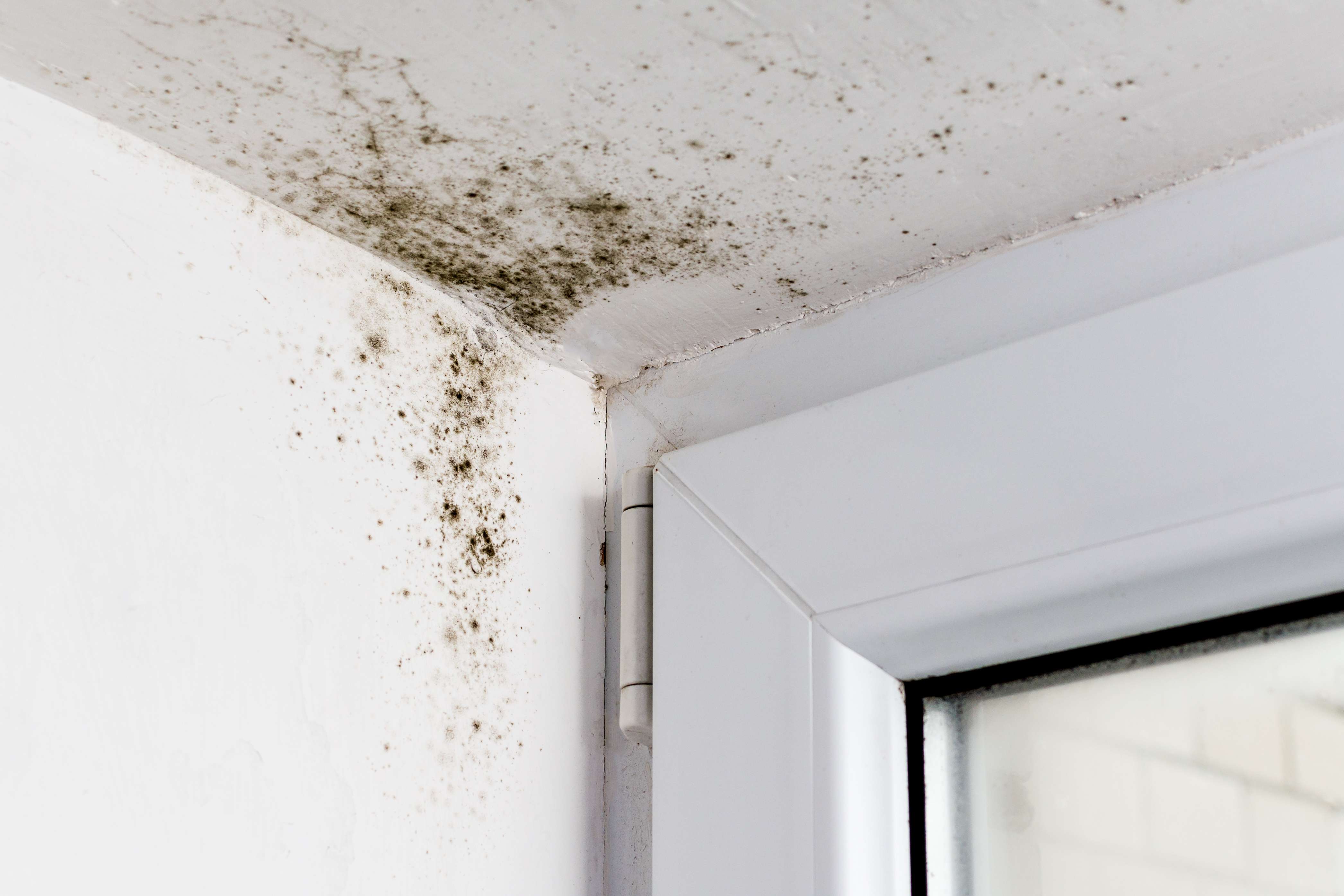 Brown mould often appears in a variety of tones, textures and sizes. Apart from brown, it can appear beige, yellow or even black in colour and is associated with a deep musty smell.

It frequents areas prone to severe water damage and often appears as discoloured, dark patches on walls, wood and tiles. Additionally, as brown mould thrives on damp wood, it is also a common cause of wood rot.

Some of the most common types of brown mould found within the home include Stemonitis, Cladosporium, Ulocladium and Aureobasidium Pullulans.

The danger of brown mould largely depends on the species at hand. Some species of brown mould, particularly Cladosporium and Penicillium, are known as toxic moulds and can cause severe illness in those with weaker immune systems. Easily distinguished by its pinkish, orange colour, pink mould is actually classified as bacteria not fungi.

However, like the rest of its fungi counterparts, it thrives in warm, moist environments with inadequate ventilation.

Commonly caused by a buildup of soap scum or shampoo residue, pink mould is often seen in sinks, showers, bathtubs and bathmats.

Some of the most common types of pink mould found within the home include Serratia Marcescens, Aureobasidium Pullulans and Fusarium.

As pink mould is commonly a bacteria, it’s not particularly harmful to healthy individuals. However, it can be harmful for those with underlying health conditions.

Because it is often found in bathrooms, pink mould can become dangerous if it enters your system via your toothbrush, contact lenses or an open wound. That’s why if you suspect you have pink mould growing in your home, it’s best to call in a professional. White mould often appears powdery and can blend in with the surface it is growing on, making it difficult to identify. It thrives in wet musty environments, commonly seen growing on wood, plants, carpet and fabric in water-damaged homes.

Types of mould that can appear as white mould include Aspergillus, Penicillium and Cladosporium.

Most types of white mould are not considered dangerous, with most being classified as allergenic or pathogenic moulds. This means that for most healthy people they will be harmless, but those with asthma or weakened immune systems may experience allergy-like symptoms from prolonged exposure.

What About The Mould You Can’t See? While we’ve discussed the signs and identifying features of mould above, it is important to note that not all infestations are visible to the naked eye.

So, if you suspect you have hidden mould growing in your home, some tell-tale signs to look out for include:

Rising damp refers to the slow movement of water from the floor to higher parts of the structure.

It occurs when groundwater rises up through tiny cracks in the building, particularly common in older or poorly constructed homes.

Apart from impacting the structural integrity of the building, it can also encourage the growth of mould. So, if you notice wallpaper loosening or visible water stains on the bottom of your walls, it may be a sign of rising damp and a subsequent mould issue.

Mould and mildew are both classified as fungi and both found in similar areas of the home. However, their main difference is their maturity stage.

Mildew is often referred to as the early or beginning stages of mould. Commonly found on bathroom tiles and grout, it will remain on the surface without eating through the material the way mould does. Mildew is an early warning sign of mould – so if you spot it, be sure to act quickly to prevent larger infestations.

If you can’t visibly see the mould, the only way to know for sure if you have a mould problem is through a professional mould inspection.

What’s Involved In A Mould Inspection?

During a mould inspection, a technician will look to identify what type of mould is growing in your home, as well as determine the cause and extent of mould growth. They will often measure the moisture and humidity levels of the property to determine if they are higher than normal and need to be addressed during the remediation process.

Once the inspection is complete, you’ll be provided with a detailed findings report and a quote for removal.

Most reputable mould removal companies offer this service for free, costing you nothing up front but often saving you thousands by catching mould infestations early.

If you’re concerned about mould growing in your home, The MouldMen team can help you take action to avoid a serious infestation. We’ve helped thousands of Australians remove and keep mould out of their properties. To get back to living in a safe, healthy home sooner, contact us today on 1300 605 960 or book your free inspection today.