Mould In Your Bathroom? Here’s What You Need To Know 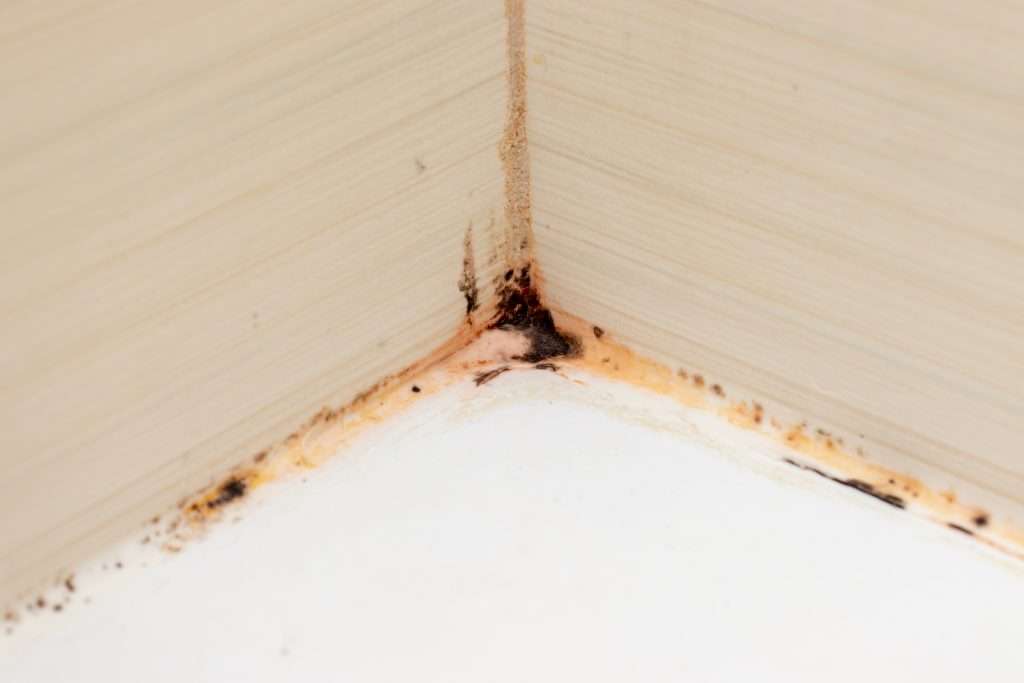 With high levels of moisture, condensation and dampness, the bathroom is a haven for mould.

And it can take hold almost anywhere – in between tiles, on the ceiling or even in the toilet bowl.

Here we’ll look at the best ways to remove bathroom mould, products to avoid, what causes it and how to prevent it coming back for good.

Found mould in your bathroom? Here’s how to safely remove it, and what to avoid.

Firstly, When Is It Actually Safe To Remove Mould Yourself?

It is only safe to remove small spots or patches of mould yourself, such as those commonly seen in-between bathroom tiles or around the sink. Removing anything larger can put your health at risk and is best left to the professionals.

If you do attempt removal, you must wear adequate protective gear to prevent touching or breathing in mould spores. This includes wearing a protective mask, gloves (and goggles in more severe cases) and adequately ventilating the room while cleaning.

What Should I Use?

While natural mould removers won’t kill mould, some, such as vinegar or tea tree oil, are useful to help prevent, temporarily remove or slow down small amounts of mould growth. In fact, a 2015 study revealed the antifungal properties of vinegar and tea tree oil were effective at inhibiting at least one common type of household mould.

While these initial studies are promising, vinegar and tea tree oil should never be treated as a permanent solution for a significant mould issue.

Without treating the source of mould, such as a leaking pipe or poor ventilation, the mould will always continue to return.

Quick tip: Look for products containing a quaternary ammonium base solution, such as MouldMen’s mould removal products. These products will safely remove and kill mould without the use of harmful chemicals.

What Should I Avoid?

Supermarket shelves are full of DIY mould removers all claiming to ‘kill and eliminate’ mould. But you might want to rethink how effective these products really are.

Even worse, bleach will remove the colour of the mould rather than the mould itself. You’ll think the problem is gone, yet the mould is still there, continuing to grow undetected.

How Can I Prevent Bathroom Mould?

Prevention is always better than cure.

Some simple tips we recommend to prevent mould from occurring include:

The constant moisture and condensation prevalent in bathrooms makes them more susceptible to mould. Some specific causes of mould in the bathroom include:

When Is Mould In The Bathroom Considered ‘Dangerous’?

Mould affects everyone’s health differently – it is impossible to give a blanket answer on the health effects of mould in the bathroom.

An individual’s reaction to mould will depend on the type of mould, the duration of exposure and their immune system. While a few small spots of mould in the shower is harmless, a bathroom ceiling covered in mould is a very different story.

What About Black Mould?

Contrary to what you might think, black mould in the bathroom is no more dangerous than any other type of mould.

Yes that’s right, black mould in the bathroom is unlikely to kill you, won’t cause cancer and is definitely not the only toxic type of mould. Basically, you should treat it with the same caution you would any other colour mould.

A Free Inspection Is The First Step To A Healthy Bathroom

If you find yourself dealing with large or reoccurring patches of mould in the bathroom, skip the DIY methods all together and contact a professional mould removal service for inspection.

MouldMen offers free inspections, costing you nothing upfront but often saving you thousands in the long run by catching an infestation early.